What to Expect at a Burns Supper in Edinburgh

Poetry, Haggis & Whisky: What to Expect at a Burns Supper in Edinburgh

If you’re visiting Scotland this January, you may hear locals talking about attending a Burns Supper, and you may be wondering what on earth that means?

Well, fear not, you’ve come to the right place; read on to find out what a Burns Supper is all about!

Who was Robert Burns?

First things first, Burns Suppers are held in celebration of a famous Scottish poet, by the name of Robert Burns. He was born in 1759, in the town of Alloway, Ayrshire, in the west of Scotland, and you can actually still visit the cottage he was born in today, which has been preserved as the ‘Robert Burns Birthplace Museum’. He came from humble beginnings, the son of a farmer, and the eldest of seven children.

His family couldn’t afford elite schooling, but made sure the children received some sort of education, and Burns soon proved himself to be an exceptional writer. He began penning poems at the age of 15, and his first collection of poems was published when he was 27.

He was a hit with the literary world in Edinburgh, and soon became a celebrity of the time. He lived in Edinburgh for many years, but never forgot his origins, and always loved farming, earning him the nicknames ‘The Ploughman’s Poet’ and ‘The Bard of Ayrshire’, and farming was the subject matter of many of his poems. He was also very popular with the ladies (he fathered 12 children, 9 of them legitimate with his wife, Jean), and wrote hundreds of love poems, but also wrote about social and political issues.

Much of his work is also written in the Scots language, though some is also in standard English. He left Edinburgh again and moved to Dumfries, where he tragically died of illness in 1796, aged just 37. 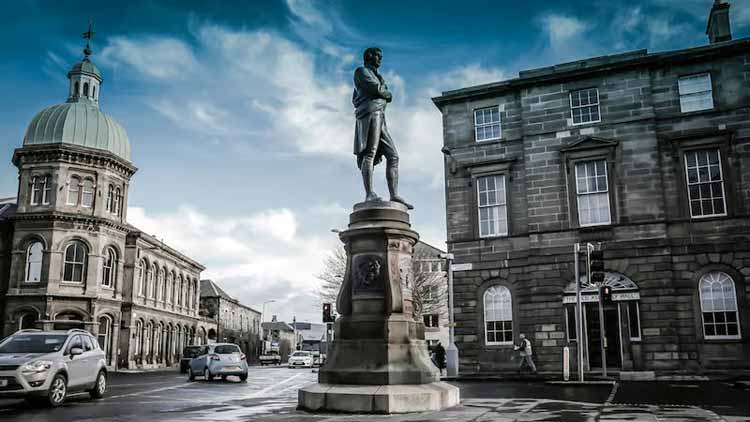 What did he write?

Burns left a huge catalogue of poems and songs, which have been recited for hundreds of years now. In Scotland, most children will learn about his work in school, but only a few of his works are known internationally, as they can be difficult for people unfamiliar with the Scots language.

His most famous song is ‘Auld Lang Syne’, which is sung around the world at midnight on New Year’s. Some of his other famous poems include; ‘Tam O’Shanter’, an epic tale of a man who stumbles upon a party hosted by the devil; ‘My Love is Like a Red, Red Rose’, a love song, which Bob Dylan has cited as an inspiration of his; ‘Ae Fond Kiss’, a love song that Burns sent as a letter to Nancy Maclehose, whom he never consummated his affair with; and ‘To a Mouse’, written as if addressing a field mouse whose home is overturned by the farmer’s plough.

Why do we celebrate him and how did that come about?

Burns is considered one of the greatest poets and songwriters of all time, not just in Scotland, which has earned him the title of being our National Bard (poet), or simply ‘The Bard’ as he may be referred to. His popularity endured after his death, and some of his friends held the first ‘Burns Supper’ in remembrance of him in 1801, on the anniversary of his death, 21st July.

They continued the tradition each year, and it spread throughout the country, though the date has since been moved to his birthday, a more joyous occasion, on 25th January. Burns Suppers are a celebration of his life, his poetry, and his importance to Scottish culture, as he was a key contributor in the preservation of traditional Scottish songs, as well as writing his own.

So, what exactly happens at a Burns Supper?

Burns Suppers can be as simple as a casual gathering of friends at home, or more commonly, they are formal dinners, often in grander venues. It’s an occasion when many men will don their traditional kilts for the evening too!

There is a generally accepted order of events which most formal Suppers will follow. Guests will enter to the sound of a bagpiper, or traditional Scottish music, and take their seats. The host will welcome everyone, and recite the ‘Selkirk Grace’, written by Burns, before the meal is served.

The starter course is traditionally soup, either a thick Scotch broth, or cock-a-leekie, which is chicken and leek soup, thickened with rice or barley.

Then, the star of the night enters; the haggis. It will be carried in to the room on a large platter, led by a bagpiper, and will circle the room before being placed at the head of the room in front of the speaker, who will recite Burns’s poem, ‘Address to a Haggis’, which culminates in the haggis being sliced open.

It’s then taken out the room again and dished up, served with mashed potatoes (tatties) and turnips (neeps). Dessert varies, but will normally be something Scottish, like cranachan, followed by oatcakes and cheese, all washed down with plenty of whisky!

After the meal, there will be toasts, including the ‘Immortal Memory’, where the main speaker will talk about Burns’s life and contributions to culture. Often there is also the ‘Address to the Lassies’, where a male speaker will give a speech, including humorous anecdotes about the ladies present, followed by the ‘Reply to the Laddies’, where a woman will do the same for the men in the room; this tends to only apply to events organized within communities where everyone knows each other, so you likely won’t get this at the events listed below.

Several Burns poems and songs will also be recited, as many as the company chooses, and often including the epic ‘Tam O’Shanter’ - considerably more impressive when done from memory! - and the evening will close with a vote of thanks, and a chorus of ‘Auld Lang Syne’.

Where can I join in and go to one?

Many locals will host Burns Suppers for family and friends, within their local community, or within organizations such as ‘Burns Clubs’, but there are also ticketed Burns Suppers which anyone is welcome to attend.

Burns Night is the 25th January, but many events are held before and after this date as well, so keep a look out for events happening, both in Edinburgh and the rest of Scotland!

Whatever your plans for celebrating the evening, a Burns Supper guarantees some good food, plenty of whisky, fabulous and often hilarious entertainment, and hopefully some great company!