Attractions/Kirks and graveyards/Top 10
You can’t miss St Giles’ Cathedral on a trip to Edinburgh, the beautiful church building on the Royal Mile, which has played an important role in the religious history of Scotland.

You can admire the stunning architecture, both in and outside the building, and learn about the Scottish Reformation and its significance.

Scotland’s religious history is quite complicated at times, and St Giles’ was at the heart of the turmoil. The country was largely Catholic, up until the 16th century, when John Knox led the Reformation, converting people to Protestantism.

You might also be surprised to learn that despite its name, St Giles’ is not a cathedral, as services are presided over by a minister, not a bishop! It was only a cathedral for two brief periods during the 17th century, when Episcopalism was imposed on the country. 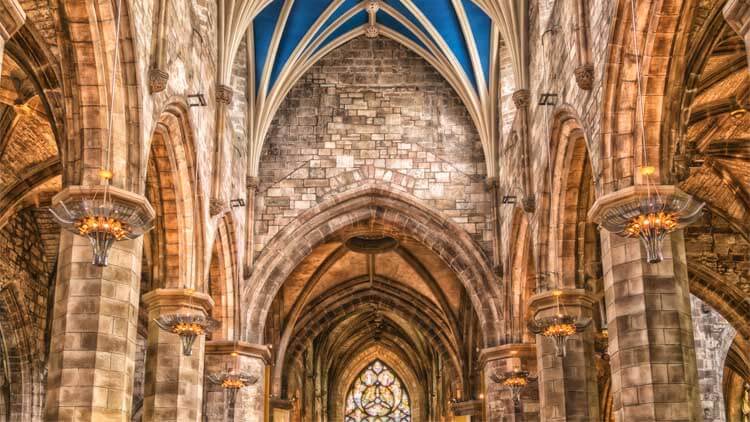 You will notice that St Giles’ is far more ornate than most Presbyterian, Protestant churches in Edinburgh - Canongate Kirk is a better example of the austere, simple design favoured after the Reformation. However, this does mean St Giles’ has some of the most beautiful architecture of any church in the city.

Inside, you can see the four central pillars, which are the only features remaining from the original chapel, constructed in the 12th century. Much of it was burned down during a fire in 1385, and has been remodelled many times since.

There are also many stained glass windows lining the walls inside, and from the outside, you should take note of the steeple, with its characteristic crown design on top, which was added in the 16th century.

You can see a statue of Knox inside St Giles’, where he served as the minister for many years. Imagine him giving his sermons from the pulpit, which he used to promote Presbyterianism, a style of worship that was far humbler than Catholicism, without the wealth and hierarchy.

If you take a look in Parliament Square, behind the Cathedral, you can also see his grave, simply designed in accordance with his beliefs, and the only one remaining from the cemetery that used to be here. 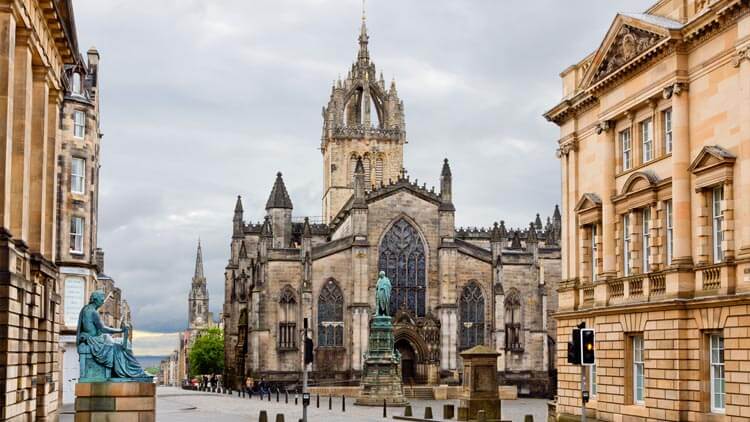 You definitely shouldn’t miss the Thistle Chapel when visiting St Giles’, which was added to the south east corner of the building in 1911. It is the official Chapel of the Knights of the Order of the Thistle, the highest order of chivalry in Scotland.

The Chapel has some of the most impressive details inside, for example, in amongst its many carvings, look out for the angel playing the bagpipes!

Take note of the seventeen, hand crafted, Gothic style chairs as well, with the helmet and coat of arms of each of the sixteen Knights of the Order carved into them. You can also imagine meetings of the Order taking place, with Queen Elizabeth II presiding over them from the seventeenth chair. 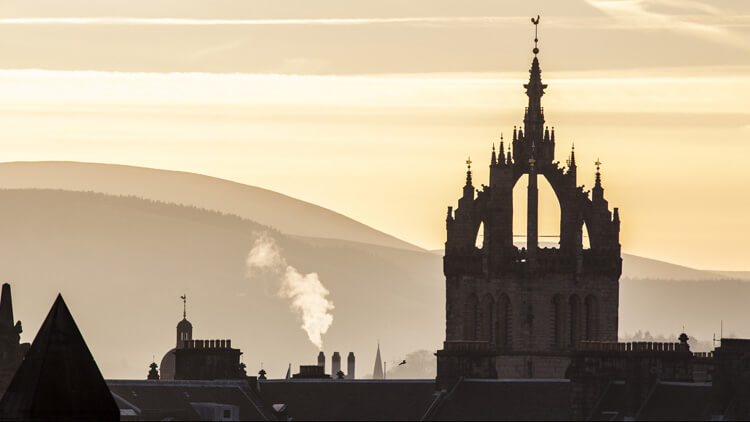 St Giles’ is a working church, with services held every Sunday morning. If you plan to attend one, remember that despite the name, this is a Protestant church, not a Catholic cathedral.

You can also choose to visit St Giles’ on a Sunday evening, to attend one of its many free concerts, which include solo performers, choirs, and orchestras. Check their website for further details of upcoming events.

You can find St Giles’ Cathedral in the heart of Edinburgh’s Old Town, on the High Street section of the Royal Mile, just a ten-minute walk down from the Castle.

Get directions to St Giles’ Cathedral.

Photography is not permitted inside the building, unless you purchase a permit as you enter, costing £2.

The Great West Window, with its stunning stained glass window designed in celebration of Scotland’s most famous poet, Robert Burns.