Useful information for your stay in Edinburgh

Edinburgh is the capital of Scotland since 1437. The heart of the city, the Old Town, still has its medieval limits and was declared a UNESCO World Heritage site in 1995.

The United Kingdom is outside the Schengen Area, which much of mainland Europe is part of, therefore it is necessary to pass through border control, monitored by British authorities, to enter the country. This requires showing a valid ID document.

When inside the UK, it is not necessary to carry ID with you at all times, therefore it is best to store it in a safe location, and carry a photocopy with you, to avoid losing your ID and having problems later when trying to leave the country.

There are three official languages spoken in Scotland: English, Scots, and Gaelic.

Everyone in Scotland speaks English, so communication in English is generally not a problem, especially in Edinburgh. Most people will speak with a Scottish accent, which can be a little difficult to understand in some cases, but it is not as strong in Edinburgh as other parts of the country.

The imperial unit system has been in use since 1824, as defined by the Weights and Measures Act, in order to standardise measurement units.

It was also official across the whole of the British Empire during the 19th century, but as the Empire dissolved, the majority of countries adopted the metric system, which became the most commonly used system around the world during the 20th century.

However, imperial units are still in use for some things in the UK. Below, are conversions between the imperial and metric systems.

The United Kingdom’s only official currency is Pound Sterling. The symbol used is “£” and its abbreviation is GBP (Great British Pounds). The pound sterling is also the oldest currency in the world still in use.

Since 1971, one pound has been divided into 100 pence, or pennies. Prior to then, one pound was divided into 20 shillings, and one shilling into 12 pence, meaning a total of 240 pence in a pound. Shillings and these older pennies are no longer in circulation.

Scottish banknotes are legal currency everywhere in the UK, but are sometimes rejected in areas outside of Scotland, where they are less commonly used, but this is rare.

It can be difficult to exchange Scottish notes into other currencies in banks outside the UK, therefore it is recommended to use or exchange all your notes before departing from Scotland.

Scottish banknotes come in denominations of 5, 10, 20, 50, and 100 pounds, but it’s also possible to get £1 notes from the Royal Bank of Scotland, though these are rare to find in circulation.

It is also possible, but not common in Scotland, to see notes printed by the Bank of Northern Ireland. Like Scottish notes, these are legal currency throughout the UK. 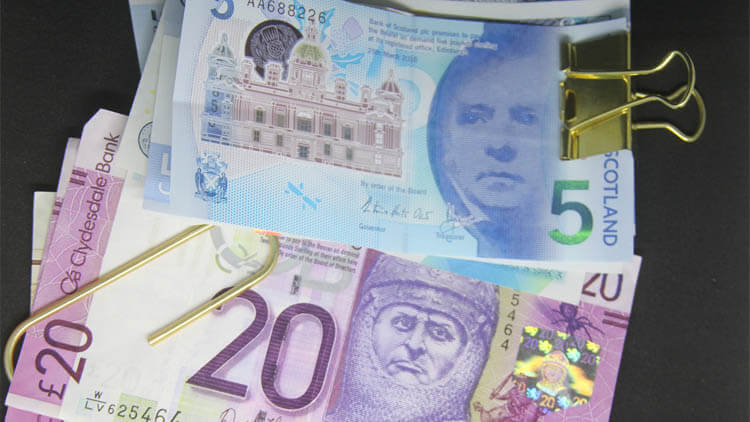 Instead of withdrawing cash and having to pay the currency exchange fee, another safe option is to pay by card. In Edinburgh, and throughout Scotland, it is usually possible to pay with any debit or credit card in most locations. However, it is important to note whether there are any additional transaction or exchange fees from your card issuer.

If you prefer to pay in cash, Edinburgh has many cash machines (ATMs) throughout the city. Depending on the company that owns each particular cash machine, different transaction and exchange fees may apply, but they must legally inform you of this fee on the screen before the cash is withdrawn.

There are also many currency exchange bureaus in Edinburgh, if you wish to exchange cash, including several on the Royal Mile and Princes Street.

The weather in Edinburgh, and across the rest of Scotland, is characterised by being very changeable. A common saying is that Scotland can experience “four seasons in one day”, or that “if you don’t like Scottish weather, just wait a bit”, since it could suddenly change.

In Edinburgh, the weather is generally quite mild compared to other parts of the country, due its proximity to the sea and low altitude (90m). The annual average temperature is 8.5°C, and total annual precipitation is around 700mm.

Despite the fact that it can rain on more then 250 days out of the year, which is around 20 days each month, heavy rain is unusual. It rains consistently at all times of year, but more frequently in summer and autumn.

Snow is uncommon through most of the year, but is possible in winter, though it is not usually very heavy.

The average temperate in Edinburgh is generally quite mild throughout the year, and it is rarely extremely hot or cold. In summer, it ranges from lows of 10°C and highs of 20°C, while winter ranges from 0°C to 6°C.

However, the temperature often feels colder than it actually is, due to the strong winds at all times of year, especially since Edinburgh is so close to the sea.

Due to its northernly latitude, Edinburgh’s number of hours of daylight varies dramatically depending on the time of year.

On the winter solstice (21st or 22nd December), sunrise is around 9am, and sunset is at 4pm, giving a total of just 7 hours of daylight.

2023 Bank and Public Holidays in Scotland

1st May   Early May bank holiday


*When a bank holiday date falls on a weekend, it will be taken on the following Monday instead.