Scott Monument, discover the tallest monument to a writer in the world

Attractions
You can’t fail to spot the huge black spire that towers above Princes Street. This is the Scott Monument, dedicated to Sir Walter Scott.

A monument to a great writer

Sir Walter Scott has been one of Scotland’s most famous writers and this is the tallest monument to a writer all around the entire world, standing 61m (200ft) tall!

This is especially fitting, given that Edinburgh is a UNESCO City of Literature, having been home to many notable writers, such Scott, Burns, Stevenson, Conan Doyle and many more! 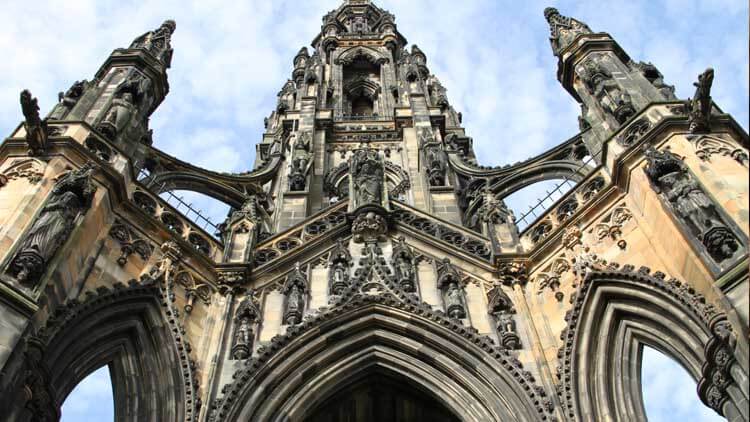 With its staggering height, you can also enjoy sweeping views over Edinburgh from the top of the monument. You have to climb the narrow stairs to reach the top, all 288 of them, but the ascent is worth it if you can manage it!

Learn about Scott’s life and works

Inside the monument, you can visit the Museum Room, which has an exhibition on Scott’s life and legacy. He is credited as having invented historic romance novels, which he wrote several of in the 18th and 19th centuries.

He wrote primarily in the Scots language, so you not be familiar with his works, but some of his most popular novels include Ivanhoe, Rob Roy, The Heart of Midlothian, and Waverley, the latter of which gave name to Edinburgh’s central train station!

For anyone who is a fan of Scott, or wishes to learn more about him, you might like to visit the Writer’s Museum, found in Makar’s Court near the Royal Mile, or travel south to the Scottish Borders, where you can visit his former home, Abbotsford House, near Melrose. 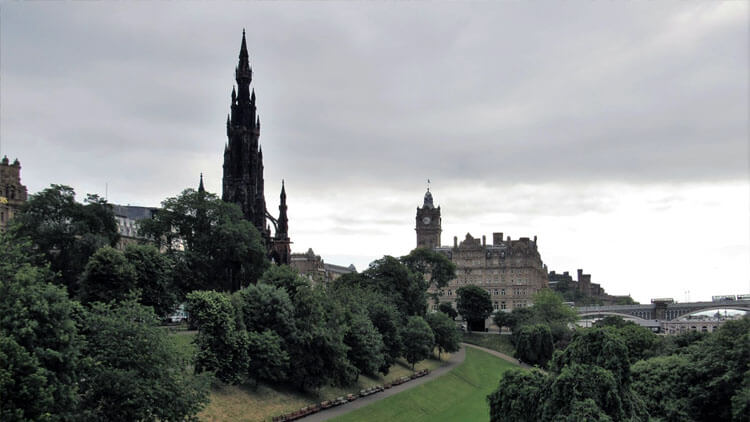 If you don’t get into the monument, you should at least take a moment to admire the architecture of the monument itself.

The spire is Victorian Gothic design, and features 68 small figurative statues on its sides, modelled after other Scottish writers, and characters from Scott’s novels.

In the base of the monument, you can see a large statue of Scott himself, with his beloved dog, Maida, fashioned from a single piece of marble.

If you have the time and the energy to climb the tower, the Scott Monument will give you an excellent view of the Old Town from a different perspective.

You can see the monument easily from anywhere in Edinburgh’s New Town. It is located in Princes Street Gardens, close to Waverley train station.

Get directions to the Scott Monument.

The stairs are the only way to reach the top of the monument, there is no option of an elevator, so unfortunately this limits accessibility.

The stunning stained glass windows in the Museum Room, featuring St Andrew, St Giles, the Edinburgh coat of arms, and the Scottish coat of arms.